Dr. Whall received a Bachelor of Science Degree in Zoology from the University of Maryland in 1975. In 1976, he entered the Graduate School program at Texas A&M University, while working as a veterinary technician in private practice.

In 1983 he returned to Maryland where he practiced Veterinary Medicine in the suburbs of Baltimore until 1989. In August of that year, he and his wife Maggie purchased Fairland Animal Hospital. This was also the year they became the proud parents of their triplets; Daniel, Kelly Ann, and Thomas. Many of you may have met them at the hospital, as they are now old enough to help out in what has evolved into a true family business.

A member of numerous veterinary associations, he is also an active member of several civic and business associations. Fairland Animal Hospital has been cited as one of the best veterinary practices in the Washington, D.C. Metropolitan Area in the last two publications of Washingtonian Magazine and Consumers’ Checkbook Magazine.

Dr. Whall attributes his success to a dedicated staff that is all committed to the well-being of the animals and to the service of the owners. Many of the staff has been part of the “family” for numerous years providing our clients with the finest veterinary care in the area.

We are excited to announce that Dr. Bowersett joined Fairland Animal Hospital full-time in January 2021 after working here part-time for a few months prior. He focuses on clinical medicine issues of dogs and cats exclusively.

Dr. Bowersett is a local resident that graduated from Springbrook High school. He went on to the University of Georgia College of Veterinary Medicine and then to Johns Hopkins University School of Public Health for graduate study. He has practiced locally for many years and now is very excited to join the FAH family and work alongside Dr. Whall and the entire FAH team.

Dr. Bowersett is married to his lovely wife, Cathy, and they have four children together. They also have 2 dogs, 2 cats, 1 rabbit, 1 bird, a horse, and many fish. In his spare time, he enjoys golfing, woodworking, and the beach! A full life!!! He cannot wait to meet you and your pet(s) soon!

Catherine joined the Fairland team in July, 2018. She comes to us with close to 30 years in the animal field. During her career, she has had the privilege to work with various species and types of animals. These range from insects, arachnids, reptiles, amphibians, marsupials, avian, all types of felines, as well as many types of larger wildlife including alligators, giraffes, rhinos, and elephants. She has a love and passion for all animals big and small. She moved back to Maryland with her husband after 10 years of managing a veterinary hospital in Virginia. While in Virginia, she started a community /state emergency animal response team that is nationally known. In her spare time, she enjoys with husband, restoring their circa 1742 home, antique shopping, bingo, spending time with family, and volunteering in her local community.

Nick came to Fairland in June of 2017 with a ton of experience. He is working towards becoming a Registered Vet Tech. He has a passion for anesthesia and emergency medicine. When not working at Fairland, he works part-time at an emergency hospital. He has two cats named Millie and Milo, a Chihuahua named Mashed Potato and a Miniature Australian Shepherd named Nellie.

Anthony joined the Fairland team in April of 2014. He is a graduate of Paint Branch HS. He loves animals but he also has an extreme passion for fish. He has two freshwater tanks at home along with two dogs Charlotte and Lucy. His plans are to return to school to study to be either a veterinarian or a marine biologist.

Megan joined the Fairland family in September 2019. She comes to us with 6 years of client service experience and animal care experience, almost 2 years of that being in the veterinary field. She currently has 2 large dogs, Hermès and Lily, along with 4 cats that were rescued. Megan has always had a passion for animal care, and is currently going back to school to be a veterinary technician. In her free time, she likes to practice her painting and doing various outdoor activities with her pups.

Gretchen joined the Fairland team in September 2017. Her passion for animals and science lead her to complete her B.S. in Biology. She is a 2017 graduate of Pensacola Christian College in Pensacola, Florida. She enjoys working in all aspects of the veterinary field and looks forward to increasing her knowledge as a veterinary technician. When she is not at work, Gretchen’s favorite place to be is on the beach, enjoying the sun, surf, and sand! She has future plans to eventually adopt a puppy of her own.

Rosni joined the Fairland Animal Hospital team in July 2020. She is currently going back to school to complete her Bachelor’s in Biochemistry so she can then go on to veterinary school to become a veterinarian. Animals are her passion and when she is not at the clinic, she can be found volunteering at animal shelters and fostering animals to find them wonderful forever homes. She has three cats of her own at home and plans to add one or two French bulldogs to her little zoo. Besides working with animals, she loves camping, being outside in the sun, or just curling up on her porch and reading a good book.

Jess joined the Fairland team in March of 2021. She hails from upstate New York with a Bachelor’s in Anthropology from Ithaca College. Jess worked as a brunch chef for over a decade before finding her passion with animals. After moving to Virginia in 2018, she got her first full-time animal job working with puppies. However, her dog-love is deeply rooted.  Her nanny-dog, an enormous Rottweiler named Nemesis, stars in her earliest childhood memories. In her free time, Jess can be found playing card games, sports, or catch her with her Scottish Terrier, Lincoln.

Leslie joined the Fairland team in January 2019. She is a 2011 graduate from Springbrook HS and comes to us with more than five years experience in the veterinary field as a receptionist. Leslie has a love for animals and currently has a German Shepherd named Kobe. When she is not at work or at home, you can find her outdoors or in the gym. She also loves taking trips to the beach.

Maya joined the Fairland team in August 2020. She is currently entering her third year of college and pursuing a Master’s degree in speech pathology. She enjoys spending time with her family and her one-year old dog named Ruby.

Ana joined our team in December 2020. She enjoys playing tennis with her friends and going to the gym. She has her own fur baby named Luna Krypta, a Maltese mix. Ana hopes to one day have a house full of dogs!

Albert is our resident ‘teenager’. He was found as a stray when he was only 2 months old by a client. He was very small and had ulcers all over his mouth. With a lot of care by our team he was healed and began eating again! He is now our official greeter and has run of the hospital. He can often be found up on the front desk waiting to greet you and your pets! 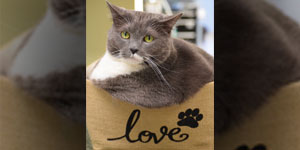 Fairland Animal Hospital is proud to serve Silver Spring and the surrounding areas. We are dedicated to providing the highest level of veterinary medicine along with friendly, compassionate service. 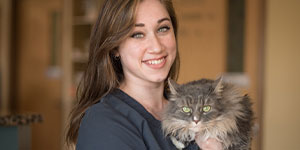 We welcome all new clients to our veterinary facility. We invite you to contact us today. If you have any questions or concerns, please don't hesitate to call us at (301) 622-2115. 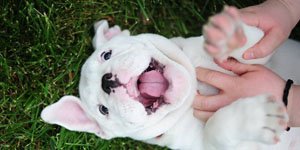 We value our patients and clients, and we appreciate the role we get to play in your pet's health care. As our way of saying thank you, check this page for different specials that will help you save on services and products.